Les Voiles de Saint-Tropez: everything you need to know about this unmissable event

Organised every year at the end of September for the past 23 years by the Société Nautique de Saint-Tropez (SNST), the Voiles de Saint-Tropez is the little sister of the legendary Nioulargue. It is the largest gathering of sailing yachts in the world, both old and new. For a fortnight, the magnificent hulls race in the Gulf of Saint-Tropez, followed by an armada of spectators. After the days at sea, the party on the water moves on land in the purest Tropezian tradition. Follow the guide.

The ultimate summer festival for 40 years 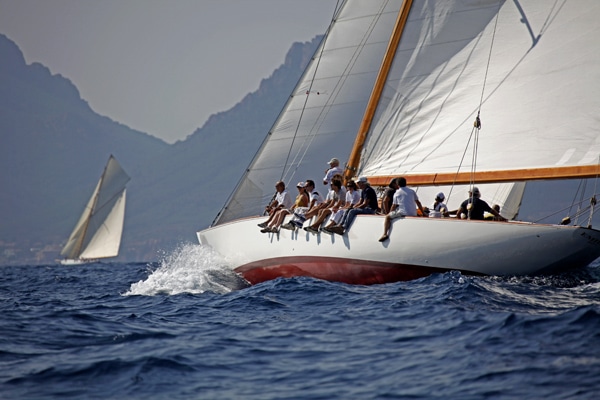 The Nioulargue, well known to sailors, is first and foremost a dangerous marine area located to the east of the beaches of Pampelonne in Ramatuelle, south of Saint-Tropez. It gave its name to a sailing race born of pure chance, a playful spirit and a beautiful encounter. At the end of September 1981, on a warm evening in the late season, as one can enjoy on the Côte d’Azur, the summer crowd had left when an American couple disembarked on the pontoon of their Swan 44. They had come to finish the Mediterranean season on the Côte d’Azur and in the clubs of the Tropez. On their slim 18-metre hull, they took advantage of the opportunity to win some local races.

Then comes an IKRA, a magnificent traditional boat of international gauge (12 metres) which revolutionised the America’s Cup race in its time. Patrice de Colmont, the charismatic owner of the Club 55, had the idea of proposing a duel regatta the following day. “That’s how it all started, with a crazy challenge between a Swan 44 and a 12 Meter JI. The founding race was the pretext for a splendid dinner that evening at Club 55. Beautiful boats, regattas and parties on land: all the ingredients were there for a recipe for success.

The exception within reach of the general public

After the gloomy end of the Nioulargue in 1995, the Nautical Society of Saint-Tropez, encouraged by sailors, shopkeepers, shipowners and the municipality, revived the September regattas under the name of Les Voiles de Saint-Tropez. For 23 years, the magic has continued to work. In 2020 and 2021, the Voiles have been stretched over 15 days, including 11 full days of regattas, to the delight of the shipowners, the 3200 sailors from all over the world and the general public who take part in the festival. All the boats are within sight of each other with arrivals and departures in front of the port. The shuttles of the famous Bateaux Verts, a local company, allow you to follow the regattas on the water.

From the entertainment in town to the unmissable boules competition on the Place des Lices, from the parties in the Village des Voiles to the (private) evening for the crews at La Ponche, Saint-Tropez’s legendary hotel: the summer season ends in style during the “Voiles”.

The most beautiful boats in the world for a few days

EMILIA 1930 in the middle of the fleet of old greements

“I never imagined that one day I would see in real life all that I had seen in books”. The phrase comes from Eric Tabarly, who was amazed when he first came to the Nioulargue. The first week (since 2020) is reserved for traditional boats and modern units that compete on a coastal course, visible from the coast. Nearly 132 modern boats, some of which are technological gems, compete against 82 of the most beautiful classic yachts in 10 categories. It is also an opportunity to see the most beautiful old boats, some of which are over a hundred years old, sailing and competing against each other. For the 40th anniversary of the adventure, all the departures and arrivals took place in front of the harbour entrance. A magnificent spectacle.

The second week is entirely dedicated to maxi yachts (sailing yachts of course). And it is the festival of gigantism on the water: nearly 45 boats were docked, from 60 to 107 feet (18 to 32 metres) belonging to the world’s greatest fortunes. Every year, high level crews, stars, headliners and exceptional boats meet there: all sheltered in the port of Saint-Tropez. Because in addition to being beautiful and luxurious, they are real racing beasts! The best skippers are hired for the occasion and some of the giants take on board thirty or so crew members for each regatta.

Enjoy the Voiles without stress by renting a car with driver 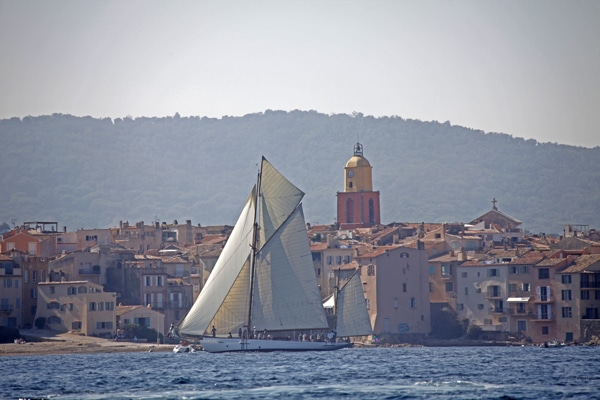 EMILIA 1930 in the middle of the fleet of old greements

Saint-Tropez remains a village and parking is rare. During the weeks of the Voiles, the nerve centre is a dead end facing the sea and the only parking spaces are taken by storm. Why not use a chauffeur-driven car hire service? The drivers of Kingdom Limousines know the Côte d’Azur like the back of their hand, from Cannes to Nice, from Antibes to Monaco and of course Saint-Tropez. For a simple transfer from Nice, Marseille or Cannes airport or to transport a group of up to 19 people throughout the week, our top-of-the-range vehicles with drivers are at your disposal. They will drop you off at the foot of the pontoons in good time to embark as soon as a regatta is about to start. No need to restrain your desire to party, we will take you back to the end of the night where you want. You can also optimise your journey in our vehicles equipped with Wifi. Our fleet includes luxury minivans and even buses to transport groups in total discretion and comfort.

Are you interested in participating in the Voiles de Saint-Tropez? Are you invited to the event? Prepare your stay and enjoy your days on the French Riviera without stress!